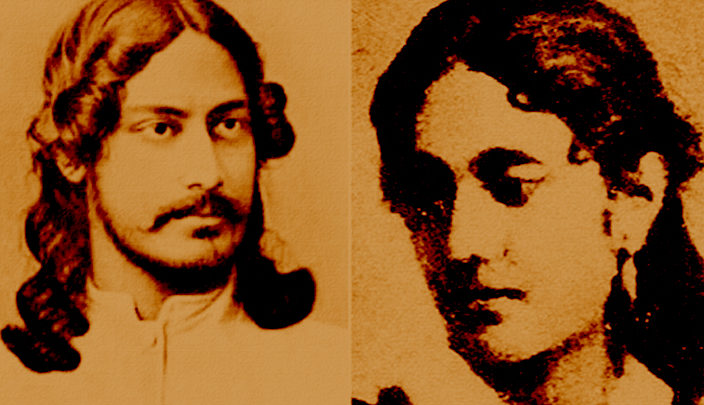 Tagore and Kadambari Devi: a story found between words and sentences

The mystery that surrounds Rabindranath Tagore’s sister-in-law Kadambari Devi’s suicide at an young age and her relationship with Tagore has attracted biographers as well as researchers over the years. People either make ignorant exaggeration or feel cagey while dealing with such an sensitive issue. Tagore himself wrote that his story can be found between the words and sentences in his writings. But there is always an unknown aspect to every story told. None other than the characters involved will ever know the truth.

A lot about their relationship has so far remained under the carpet. But I believe by being a genius does not elevate one to a Godly pedestal, for we are talking about human beings, much like us, though brilliantly talented. After reading a few books and articles I find that it would take a really mature mind to understand the depth of their astounding relationship. Let us ponder over the subject without being judgemental and visit a mansion in Calcutta called Jorasanko Thakurbari, and into the hallways of this large house.

In this mansion and hallowed halls, lived Rabindranath’s grandfather Dwarakanath Tagore, an astute business tycoon who owned a fleet of ships, coal mines, silk and sugar factories, insurance companies, and banks. His was one of those Indian private companies who produced opium in India and sold it in China. Dwarakanath was of the firm conviction that “the happiness of India is best secured by her connection with England” and was Queen Victoria’s favourite. But he did not live long and died on 1st August, 1846, at the age of 51 in London under somewhat mysterious circumstances.

It was during Dwarakanath’s lifetime that the Tagore family’s fortune grew to almost unbelievable proportions, albeit to be quite completely lost with his death. It took much privation, sacrifice and effort on the part of his son Debendranath to clear the debts left behind by the Prince. Devendranath was not a great admirer of the British and did not want to become a cultural replica of the West. He hated opium trade and refused to carry on with his father’s hard-won business. Often addressed as Maharshi (Great sage), Devendranath was a deeply religious man and took over the leadership of the Brahmo Samaj after Rammohan Roy’s death. But Devendranath’s spirituality did not deter him from maintaining his worldly affairs. He did not renounce his material possessions, instead continue to enjoy them in a spirit of detachment.

Devendranath fathered a 15 member lineage. Rabindranath Tagore was the youngest of them. The Tagores were highly literate and creative. Even the women in their household were encouraged to delve deep into the Bengali literary world. In fact, the family was regarded as a key influence during the Bengal Renaissance. They contributed substantially in the fields of art, music, literature, business, social and religious reforms.

But all were not well. The Tagores were orthodox in many ways and their men married underage girls. For example, Dwarakanath married Digambaridevi who was then just 9 years old and this tradition continued for a long time. Moreover, colour was sacrosanct in the tagore family. There is an instance of a young bride not being fair enough (Satyendranath’s wife) being scrubbed daily with potions to make her fairer. It was also a typical ancestral home where antagonism and back biting existed and ran akin to many of the TV soaps we see today. On the other hand, the large home had a fair share of mental illness too, with two of Rabindranath’s brothers spending much of their time in asylums.

Now that we have got a hang of the place let us try to understand Kadambari Devi, Rabindranath Tagore and their relationship. Kadambari was married to Jyotirindranath Tagore, Rabindranath’s elder brother, on 5th July 1868 at the age of 9 years. Being the daughter of the watchman of Tagore’ house she faced intense humiliation. No one loved her, not even her husband. She was lonely….lonely to the extreme level. So was Rabindranath who was a young kid of 7 years then and was considered a ‘good for nothing’ academically, flunking out of school eventually. His mother Sarada Devi had little time or inclination to look after her youngest-born. Her motherliness had been taxed to the utmost as she had fifteen children and perhaps had little surplus left to spare.

But as both Kadambari and Rabindranath were similar in age and both were lonely, they instantly became playmate and companion. They grew up to adolescent and then to their youth, but the bond remained the same, if not more ! Kadambari loved poetry, music and literature, cooked well, especially for Rabi, bringing many new dishes to the household. She loved flowers and birds and converted the terrace into a roof garden. There Rabi started out with his poetry and Kadamabri listened to them and provided ample criticism, goading the young talent to greater and greater heights. Tagore gave her a nickname “Hecate” the name of a Greek Goddess, linked to moon but also to witchcraft and magic. Kadambari on the other hand called him Bhanu for sun. After the death of Sarada Devi on 8 March 1867, when Tagore was close to 14, Kadambari took over the additional role of mothering Robi, even “fanning the boy’s sweating brow using a hand fan” in absence of electric fans then.

Life went on and Tagore was soon sent away to England to become a barrister. Being a school dropout how could he go to study law is a question mark. Probably the rich had their ways. However, Tagore missed his home and sister in law and came back to Bengal in 1880 without completing study. Soon he published his novel ‘Bhagno Hridoy (broken heart)’ and dedicated it to his ‘notun bouthan’ Kadambari Devi. What happened next is a mystery as Kadambari Devi attempted suicide. Gossip was increasing in the Jorasanko house and Robi soon moved to a house rented by his elder brother and away from his beloved notun bouthan to concentrate on writing. He wrote:

“From the very beginning of time, you have been my partner because I am your shadow. You could better see me in your smile and tears…. You will be surprised to see me gazing on your face in the pitch darkness when you are wrapped in a blanket of despair…

Wherever you turn, you will see me. My shadow will taper off to the sky but it will enshroud the whole world. My miserable voice and sinister smile will resound in all directions because I have an insatiable hunger… In short, I am a malady to your mind and body. I am the sword piercing your heart. Just as the night comes at the end of the day, I am behind you and that is your destiny”.

One fine day Tagore was summoned by his father and within days married off to a child bride named Bhabatarini Devi on 9 December 1883. At that time Tagore was 22 years old and his wife, an illiterate daughter of an estate hand was just 11 years of age. The marriage was given in such a hurry that many of the family members could not be present. Even his father came a month later, presented four gold coins and departed. The bride’s name was changed to Mrinalini by Tagore and she was immediately sent away to a convent school for studies & etiquette training. It is said that Kadambari did not want this marriage to happen but she was not in a position to oppose it openly.

As usual Kadambari’s husband and Rabindranath’s elder brother Jyotirindranath remained busy with his work and interests and had no time for Kadambari. He was a multi-talented personality having interests in theatre, paintings, translation, editing, music and also in business ventures. So Kadambari remained a neglected lady. All of a sudden after Tagore’s marriage she lost all her un-written rights on Rabi which she gained over the years. Kadambari, who was issueless, also lost Urmila, the adopted child she held so dear in a freak accident, caused by her momentary lapse. She was chided tremendously by all women in the family as Urmila was the daughter of her sister-in-law Swarnakumari Devi. The final nail in the coffin was hit when Jyotirindranath failed to turn up to pick up Kadambari for the launch function of his new steamer. A well decked Kadambari sat waiting and incidentally discovered a love letter written to Jyoti by one of the theatre actresses.

Kadamabari who was sick, possibly suffering from deep and long bouts of depression, could not take it anymore. After 4 months and 10 days of Rabindranth’s marriage, on 19 April 1884, she committed suicide by an overdose of opium at a tender age of 26. We don’t know why did she kill herself. Was it Rabindranath, Jyotirindranath, her own depressive suicidal maniac tendencies or oppressive back biting at Jorasanko ? The family might know the reason but it was suppressed and never made public. All her letters, diaries, coroner’s report were destroyed. The shattered Tagore wrote: “All around, the trees, the soil, the water, the sun, the moon, the stars, remained as immovably true as before; and yet the person who was as truly there, who, through a thousand points of contact with life, mind, and heart, was ever so much more true for me, had vanished in a moment like a dream”.

After 4 years of Kadambari’s death Tagore wrote a poem which is a well known Rabindrasangeet “Tobu Mone Rekho..”. This was written in her memory being in her place as if she was telling him: “yet, do remember, if I move far from here , yet, do remember. If the old love is smothered by a love’s new snare” and so on.

Such was the depth of Kadambari’s influence on Rabindranath that at the age of 70, he confessed to Nandalal Bose that many of his paintings of a woman’s face were drawn keeping Kadambari Devi in mind.

Marie Seton, in her book “Portrait of a director: Satyajit Ray” (1971), is all about Ray’s research on Tagore before his translation the “Nashtaneer (Broken House)” into a film named ‘Charulata’. It was established that the story of ‘Nashtaneer’ was written by Tagore keeping Kadambari Devi in mind. It’s the story of Kadambari, her husband Jyotirindranath and himself. In this film Roy hinted that Rabindranath’s relationship might evolve out of affection into love. Whatever, it was indeed a complex relationship which could never have ended ‘happily ever after’ for any of the three involved. She might have thought of not to die by inches but to die for good. With that Kadambari the enigma, vanished from this world, mysteriously forever.