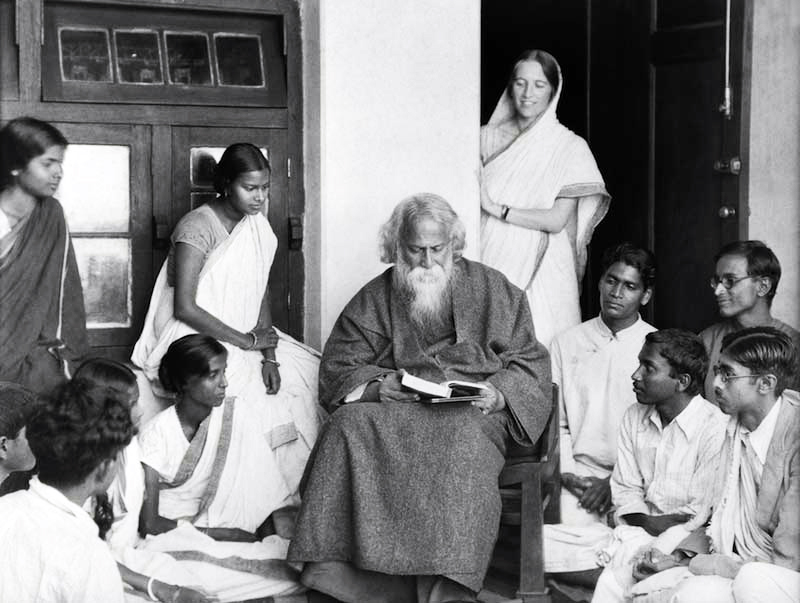 “She is our own, the darling of our hearts, Santiniketan.

in the shadows of her trees we meet

in the freedom of her open sky.

Our dreams are locked in her arms.

Her face is a fresh wonder of love every time we see her,

for she is our own, the darling of our hearts” – Rabindranath Tagore

Santiniketan is a small town near Bolpur in the Birbhum district of West Bengal, India, approximately 180 kilometres north of Kolkata (formerly ‘Calcutta’).   Santiniketan is situated at an elevation of 200 feet above sea-level. The ground slopes gradually to 100 feet above sea-level near the Ajay river about 3 miles to the south and the Kopai stream some 2 miles to the north. The southern boundary of Santiniketan merges into a vast plain of rice fields. On its northern fringes are the “khoai” lands with deeply indented gullies caused by erosion over denuded land.

This place was previously called Bhubandanga (named after Bhuban dakat, a local dacoit). Maharshi Devendranath Tagore who found solace and serenity in this barren land built a house in the early 1860s. This house, named, ‘Santiniketan’, or ‘abode of peace’ later came to denote the entire area. Santiniketan became a spiritual centre where people from all religions were invited to join for meditation and prayers. Devendranath founded an ‘Ashram’ here in 1863 and became the initiator of the Brahmo Samaj.

Devendranath’s son Rabindranath, liked this place so much that he set up a Bramhacharya school here, which later came to be known as Patha Bhavana in 1901. Rabindranath received Noble prize for literature in 1913 and using the prize money he expanded the school into a university in 1921. He named it Visva Bharati which means the communion of the world with India. It marked a novel blending of the ideas of the East and the West. The spiritualism of Indian philosophy and progressive outlook of the west were blended together. Visva Bharati became one of the most famous central university in 1951 with colleges of science, teacher’s training, Hindi, Sino-Indian studies, music and dance .

In “My School”, Tagore has written: “I selected a beautiful place, far away from the contamination of town life, for I myself, in my young days, was brought up in that town in the heart of India, Calcutta, and all the time I had a sort of homesickness for some distant lane somewhere, where my heart, my soul, could have its true emancipation… I knew that the mind had its hunger for the ministrations of nature, mother-nature, and so I selected this spot where the sky is unobstructed to the verge of the horizon”.

It was always the objective in Santiniketan to establish a sense of oneness with nature. A child has to be aware of his surroundings – the trees, birds and animals around him. Tagore envisaged that nature is the best teacher to the pupil. He rejected a book-centred education for students. To him it is not just to confine the mind of boys and girls to text-books only, it  kills the natural instincts and creative skills of a student. In Tagore’s philosophy of education, the aesthetic development of the senses was as important as the intellectual.

Blending the best of western and traditional eastern systems of education, the curriculum revolved organically around nature with classes being held in the open air. Tagore wanted his students to feel free despite being in the formal learning environment of a school, because he himself had dropped out of school when he found himself unable to think and felt claustrophobic within the four walls of a classroom. And to guide them he wanted teachers who could go beyond book-learning, who were seekers themselves.  In this context one might mention Tejeschandra Sen, who along with Jagadananda Roy, was one of the pioneering teachers of Nature Study in India. They were able to instill in children a love for and curiosity about the natural world. Lord Haldane, visiting Santiniketan in 1954 was much impressed with Tejeschandra” s method of teaching.

Rabindranath took a deep interest in planting trees. He introduced the “Vriksharopana utsav”, or tree planting ceremony in 1928, popularizing the concept. Thus Santiniketan gradually became a veritable botanists’ paradise. Plants, trees, creepers, and orchids from various parts of India and abroad have been made to flourish in this once semi-desert.

Tagore felt : “without music and fine arts, a nation lacks its highest means of national self-expression and the people remain inarticulate”. That is why Kala Bhavana and Sangeet Bhavana, the art and music colleges of Visva Bharati are still considered as one of the best art and music colleges in India and probably in the world.

Gurudeva Rabindranath Tagore always acknowledged the rightful place of music and dance in his scheme of education. He regarded the language of sound and movement to be the highest means of self-expression without which people remain inarticulate. Himself being a composer of great originality, he wrote dance-dramas, operas and more than 2000 songs to fit where human emotions come to play.

Sangit-Bhavana imparted  training in Rabindra Sangit, Hindusthani Classical Vocal and Instrumental Music (Esraj, Sitar, Tabla, Pakhwaj).  Tagore helped revive folk dance forms from other parts of India, such as Manipuri, Kathak and Kathakali, at Santiniketan. He also supported modern dance and was one of the first to recognize the talents of Uday Shankar, who was invited to perform at Santiniketan.

This ground-breaking outlook is also the reason why Santiniketan has given India many luminaries like pioneering painter Nandalal Bose and Binod Behari Mukherjee, famous sculptor Ramkinkar Baij, Nobel-winning economist Amartya Sen, globally renowned filmmaker Satyajit Ray, country’s leading art historian R. Siva Kumar and our former prime minister Mrs. Indira Gandhi. The above-mentioned artists along with Tagore himself not only represented Visva Bharati, but together they organised an art movement.

The University also had several eminent international alumni that include Indonesian painter Affandi, Italian Asianist Giuseppe Tucci, Chinese historian Tan Chung, eminent Indologist Moriz Winternitz, and Sri Lankan artist Harold Peiris, among many others. Pouring his creative genius into his work, Tagore himself produced some of his best literary works, paintings and sketches at Santiniketan.

Located in the heart of nature, Visva Bharati aimed to combine education with a sense of obligation towards the larger civic community. In an attempt to help with rural reconstruction, Tagore also sought to expand the school’s relationship with the neighbouring villages of the Santhal tribal community. Thanks to his efforts, Santiniketan has today become the largest centre for educated Santhals in West-Bengal. Many of them have become teachers, several serving in Visva Bharati itself, while others have become social workers.

The celebration of seasons was always a feature in Visva Bharati. Thus numerous social and cultural events taking place throughout the year, have become part and parcel of Santiniketan. These include – Basanta Utsav, Barsha Mangal, Sharodutsav, Nandan Mela, Poush Mela, Magh Mela, Rabindra Jayanti to name a few. Of these, the Poush Mela deserves special mention, this being a major tourist attraction. It is a three-day fair, starting on the seventh day of the Bengali month Poush (usually, last week of December). It fetches not just tourists, but also artisans, folk singers, dancers, and the traditional Baul from the neighbourhood.

The whole place of Shantiniketan thus is reminiscent of the great poet Rabindranath Tagore. His vision of International University became what is now a university town that attracts thousands of visitors each year. Uttarayan complex where the poet lived in several houses  such as ‘Udayan”, “Konark”, “Shyamali”, “Punascha”, and “Udichi” and penned many of his classics is also a place of historical interest. Santiniketan is a unique blend of art, human values and cultural interchange. Even today, in every step, in every brick and every tree in Santiniketan, one can still feel Tagore’s passion, his dedication and his pride in the institution. As Tagore wrote in his last letter to Mahatma Gandhi :”Visva Bharati is like a vessel carrying the cargo of my life’s best treasure and I hope it may claim special care from my countrymen for its preservation”.

This is the fascinating story of how the rural paradise of Santiniketan, Tagore’s erstwhile home, became a thriving centre of art, education and internationalism over the years.